This article gives and introduction to common bonded vs separated electrical earthing systems.

Earthing systems may be stand-alone (with no other metallic connections), or they may be connected together to a form a larger, common bonded earthing system. With the exception of LV earthing, it is generally at the discretion of the local utility and electrical designer whether an earth grid is stand alone or common bonded to a larger earthing system, provided the designer can satisfy the safety requirements outlined in relevant standards such as AS/NZS2067.

Any earthing system can be separate or common bonded (between voltage levels, or locations such has mining environments) but this article focuses on distribution earthing.

For distribution substations such as pole top transformers and padmount transformers, assuming the connection to the zone substation on the HV side is solidly bonded, if the local earthing is common bonded, the HV and LV earthing is connected together, including the LV earthing of interconnected houses via the neutral and MEN (multiply earthed neutral) system. Some utilities refer to this arrangement as CMEN (for Common with MEN).

The advantages of a common HV and LV earthing system at a distribution substation are as follows:

Assuming there is little volt drop over the LV neutrals conductors, and the soil voltage drops away before the nearby houses, during a fault event there could be up to 4500V appearing on the LV and associated MEN systems, including all bonded metal items and possibly water taps in the houses.

Compliance will be difficult to achieve with this arrangement.

Local earthing is the same as above (3 Ω), but this is now aided by the greater MEN system, and the cable screen which returns a large percentage of fault current to the zone substation without contributing to EPR.

Compliance should be readily achieved with this arrangement.

In this case, the padmount does not benefit from any cable screen return to the zone substation, yet is still close enough to have reasonably high fault levels.

A separate earthing system for a distribution substation involves physically and electrically disconnection and separating the HV earthing of the transformer and HV earth stakes from the LV earthing system including local stakes and interconnected MEN system connected by the LV neutral.

The key advantage to separating any earthing system is the ability to minimise the transfer of voltage. For distribution earthing the aim is as follows: 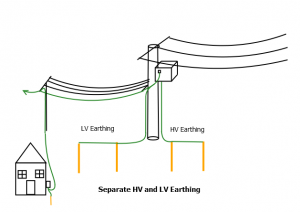 Using the same case given previously, the substation has an EPR of 4500V.

To prevent this high EPR from impacting the nearby houses, the earthing is separated into HV and LV stakes. The spacing needs to be far enough away so that the voltage on the LV stakes is at or below the allowable of 130V.

The voltage on the soil (with respect to remote earth) reaches 130V in 8m from the HV earthing, therefore the HV earthing is installed near the pole, and the LV stakes are installed starting at 8m away, joined to the transformer LV neutral with an insulated conductor.

Compliance should be readily achieved provided the separation is implemented properly.

Assuming the same example as before, but now with separated HV and LV earthing, the HV fault still benefits fromt he cable screen connection, but misses out on any benefit of the LV/MEN earthing.

The LV earthing needs to be located 4m away where the soil voltage has reduced below the allowable limit.

Compliance is possible here, but is often difficult to locate LV stakes any distance from the substation in built up areas, and separation to other MEN points, water pipes, telecommunications etc can sometimes be challenging.

Using the example previously discussed, there is no HV cable screen return path to the zone substation. Without the benefit of the LV/MEN system the results are:

The LV stakes need to be located 25m away for compliance. This is impractical with nearby houses and services. Without the MEN system or any metallic return to the zone substation, the earth grid must handle the full fault current on it’s own, resulting in high local EPR.

When to use what – General Guide

In general, use Common Earthing if you can easily satisfy the following:

And use separated if the following is true:

If these conditions do not apply (such as a padmount is a semi built up area supplied by a UGOH) then design will be required by a competent person who may choose common or separated in conjunction with local controls to ensure a safe installation can be achieved.

Local utilities will have their own rules and requirements regarding bonding. This information sheet is a guide only to understand the difference between common and separate earthing systems, and to assist in identifying how they might be applied.

While many utilities have simple tools that can be used for distribution earthing, Zero Sequence Earthing is happy to assist with any design or testing needs such as: